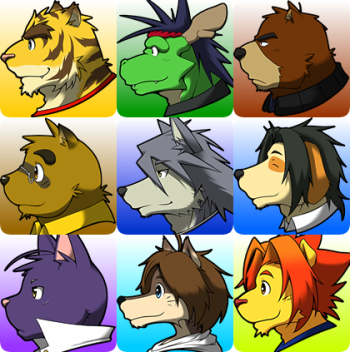 Morenatsu (漏れなつ。 "Summer break") is an adult-oriented Furry Bara Genre H-Game. It was led by the Kemono artist Gamma, but after his contributions he has since left the project. Morenatsu is currently only in Japanese, with characters developed by many different aggregate sources on the 2ch Kemono image board.

The game is still incomplete (and has been for years; development was discontinued in 2015 before a new team has picked up the development), so only a trial version of the game is currently available. A newer demo had been released, containing the completed stories for Tatsuki, Kounosuke, Kouya, Shun, Juuichi and Shin along with the conclusions of their love stories.

The story: The game takes place during summer vacation in Japan. The main character, Hiroyuki Nishimura (one of the few humans in the game), gets a letter from a friend in the village where he spent his childhood, Minasato village (水郷村 Minasato-mura). He moved away to the city five years ago. His grandparents currently live there, so he decides to return there.

With regard to gameplay, it's a gay Visual Novel. The player has one month to gain the affection of one of nine men. They are:

If the player makes the correct decisions, Hiroyuki and one of the characters will make love and establish a romantic relationship.

But the story is long and character-driven, with little or no sex scenes until the love scene. Morenatsu indeed has a broad gay Kemono audience appeal ranging from G-rated to X-rated, and the game's public visibility is almost entirely sustained by an enormous amount of fanart

, just as equally ranging from G-rated to X-rated. (This FurAffinity link is fairly work-safe for non-members or for accounts that do not have adult content activated. But if you have a FA account and adult content is activated, some of the thumbnails on that page will be Not Safe for Work.)

While this was looking to become yet another piece of Vaporware, a new team in 2015 has decided to pick up where the original left off. However, due to personal issues among the team that was cancelled too. However, another team by Stormsinger Studios would end up making their own version of the game. For tropes regarding Homecoming: Morenatsu Revisited, visit this page.

NOTE: Since this is an ongoing project, these pages will be periodically updated whenever a new version is available.