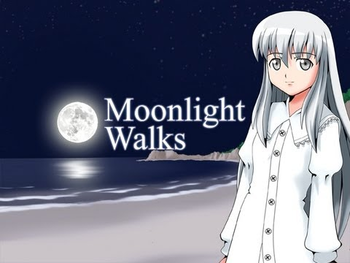 A young American college-bound man decides to visit his aunt and uncle at North Sand Island, a small barrier island along the Atlantic shoreline. One night, while taking pictures of the full moon, he spots a mysterious girl in a long white dress walking alone along the beach. Normally, only other stargazers are out at this time, but it doesn't look like she's particularly interested in the night sky. Intrigued, the man decides to go talk to her...

Moonlight Walks is a freeware Visual Novel created by amateur gamemakers American Bishoujo in Ren'Py, and unlike many other games of this format, it is an English-language original. The player fills the role of the unnamed young man, and the game largely deals with his efforts to find out more about her past.

The game itself is rather brief—one can easily play through it in a single 30-minute session—but it has four different endings that can keep the player amused by finding all of them. The plot is a little predictable at times, but all in all it's rather enjoyable for an amateur work. The game can be downloaded for free from American Bishoujo's website here