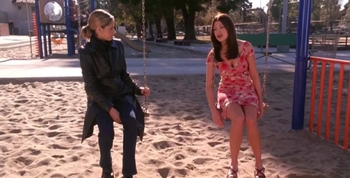 "Ow. I don't know about you guys, but I've had it with super-strong little women who aren't me."
Driver: What do you expect to find here in Sunnydale?
April: True love.
Advertisement:

Buffy rants about her problems with Spike while pounding away at Xander, who is wearing a sumo-sized bodysuit. Xander consoles the Slayer about her love life, blaming the Hellmouth for her not being able to find a decent guy. A young woman arrives in Sunnydale, searching for her boyfriend. Joyce nervously prepares for a date with a man named Brian with the help of her daughters.

Anya and Tara discuss the Internet and Anya's knowledge of online stock trading and websites. The woman, calling herself April, approaches them, asking if they know where Warren is, but when the girls can't help her, April moves on to another person and asks the same question. That night, Buffy and Xander dance at a campus party while Anya, Tara and Willow watch. After dancing, Buffy locates Ben at the party and casually catches his attention. They chat briefly but awkwardly, and Buffy asks Ben to dance.

Anya admires the Chex Mix with Xander when April arrives at the party, still searching for Warren. Warren just so happens to be at the party and escapes with his date before April discovers him. April questions the people at the party, offering that Warren is her boyfriend and he lost her. Tara is mildly concerned about her relationship with Willow when Willow remarks, "Yeah, a pretty girl like that won't stay lonely for long."

Spike approaches Buffy while she's waiting, but she tells him off before Ben returns. Ben offers Buffy his number for a possible coffee date and isn't scared off when Buffy warns him of her bad history. After seeing Buffy with Ben, Spike is inspired to hit on April, but his suggestive comments only anger her and lead her to throw the vampire through a window, much to the crowd's show. Both amused by Spike's pain and shocked at April's behavior, Buffy tries to talk to April, but April throws her aside and leaves.

Later, at Xander's apartment, the gang quickly deduces that April is a robot, and while they don't view her as an immediate threat, they do realize that they have to track down Warren and get him to April before someone less durable than Spike rubs her the wrong way. Buffy returns home, and Giles suggests he not watch Dawn alone anymore because he can't take much more exposure to the habits of a young teenager. Joyce returns from her date in an extremely good mood, shocking her daughter with the joke that she left her bra in Brian's car.

April goes door to door, searching for Warren's residence. Willow finds Warren Mears on her computer and the house where he could be living. The gang talks about Warren and how he made April to fill a void in his life. Buffy finally gets up the nerve to call Ben, but the phone rings at Glory's place. She morphs into Ben to answer the phone, and a date is made for coffee.

Warren rushes to get packed and move away with his current girlfriend, Katrina, but she doesn't understand why. Buffy shows up at Warren's in search of answers relating to April, while Katrina finally walks out, upset about being kept in the dark. Warren reveals to Buffy that he made April to be the perfect girlfriend, but rather than falling in love with her as expected, he instead grew bored with how predictable she was and how easy things were with her. He then met and fell in love with Katrina, and, instead of "breaking up" with April, cowardly left her in his dorm room to let her batteries run down. Buffy asks if April is dangerous, and Warren tells her that she's only programmed to be in love with him—which confirms to Buffy that she is dangerous.

Meanwhile, the Scoobies are meeting at the Magic Box, when they receive a visit from Spike. When he enters, however, he receives open hostility and disdain from the gang, including Dawn. Spike attempts to win some acceptance by giving a somewhat embellished explanation of what happened previously, but the Scoobies are not fooled. Giles takes command, roughly shoving him against a wall, informing him that the Scoobies are not his friends and that he will never be able to get into a relationship with Buffy, and finally ordering him to get over his feelings for Buffy and leave the Magic Box. After a brief hesitation, Spike departs.

Katrina encounters April at a park, and April uses force to make Katrina admit that Warren is her boyfriend. Warren finally tells April that he can't love her — because he's in love with Buffy! A fight breaks out between Buffy and a furious April, which only stops because her batteries start running down. After talking with April in her final moments, Buffy realizes that she doesn't need a man in her life. Buffy leaves a message for Ben on his answering machine, canceling the date, but Glory listens to the message, not Ben.

Spike confronts Warren about making a robot for him, one based completely on Buffy. Warren refuses, but Spike won't take no for an answer.

Buffy returns home to find that Joyce has been sent flowers from the man she recently had a date with, as well as a card saying he had a lovely evening and he hopes to see her soon. After all day dealing with a skeezy guy and his sex-bot, Buffy remarks how nice it is to see that there's "Still a couple of guys gettn' it right."

And if the episode ended right there, things would be very different.

Buffy calls upstairs to see if Dawn needs picking up. Receiving no answer, Buffy heads into the sitting room to see her mother sprawled across the couch... with opened eyes and pale skin, not breathing. Buffy soon realizes something is wrong...