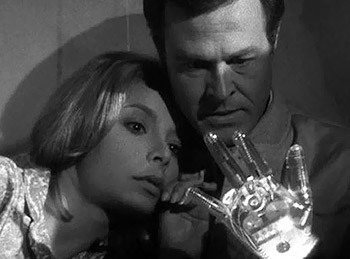 Consuelo and Trent consult the glass hand.
The Control Voice: Through all the legends of ancient peoples — Assyrian, Babylonian, Sumerican [sic], Semitic — runs the saga of the Eternal Man, the one who never dies, called by various names in various times, but historically known as Gilgamesh, the man who has never tasted death... the hero who strides through the centuries...
Advertisement:

Mr. Trent (Robert Culp) is a man with a mission... but he doesn't know what it is, or anything else about himself. As he reflects in an Internal Monologue:

Trent: I was born ten days ago, a full-grown man born ten days ago. I woke on a street of this city. I don't know who I am, where I've been or where I'm going. Someone wiped my memories clean, and they track me down and try to kill me. Why? Who are you?

Trent is constantly pursued by sinister men in strange uniforms. He manages to stay one step ahead of them by following the advice of... his hand! Made of glass and apparently capable of speech, Trent's hand is a computer that can answer many of his questions. But it cannot tell him who he is or why his enemies seek him until he finds all of its fingers, which are lobes of the computer, and which contain the information that will explain everything. The only trouble is, the missing fingers are in the hands of Trent's enemies.

Trent captures one of his opponents, Breech (Steve Harris), and interrogates him. Breech explains that he and his companions are aliens from the planet Kyba, which is at war with Earth in 2964 — 1,000 years in the future. Trent, "the last man on the Earth of the future", used a "Time Mirror" to escape to 1964 in a last-ditch attempt to save humanity, and a squad of Kyben were "altered to look like humans" to go after him. They're also competing with Trent to complete the glass hand because they too need its knowledge. The Time Mirror is hidden in The Dixon Building, a dilapidated office complex; both Trent and the Kyben are wearing medallions that work as "focusing elements for the mirror", and if a medallion is removed, its wearer suddenly returns to his native time — dead. Upon hearing this, Trent removes Breech's medallion and heads for the Dixon building.

Advertisement:
The Control Voice: Like the Eternal Man of Babylonian legend, like Gilgamesh, one thousand plus two hundred years stretches before Trent. Without love. Without friendship. Alone; neither man nor machine, waiting. Waiting for the day he will be called to free the humans who gave him mobility. Movement, but not life.

Demon With a Glass Trope: