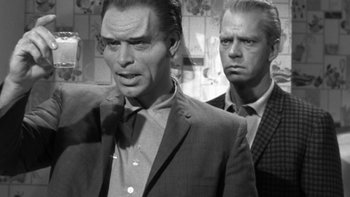 An "expanded" Roy prepares to dose Peter. "If you'd care to sample this, I promise you'll be charmed with its effect.... it will lead you into a world whose glory is magnificently beyond anything you've ever known."
The Control Voice: As far back as men have recorded their history, veils have been lowered to disclose a vast new reality — rents in the fabric of Man's awareness. And somewhere, in the endless search of the curious mind, lies the next vision, the next key to his infinite capacity...

A researcher takes drugs that turn him into a superbeing who wants to convert or destroy the rest of humanity.

The Control Voice: Some success, some failure, but either way the gnawing hunger to know is never sated, and the road to the unknown continues to be dark and strange.