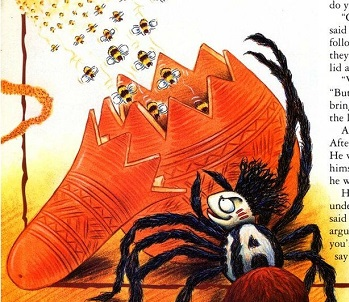 "Oh! what a tangled web we weave
When first we practice to deceive!"
— Marmion, Walter Scott
Advertisement:

Spiders are well-known for the webs they weave and lay as traps for unsuspecting prey. In line with this, fictional spiders and characters associated with them will be cast as witty tricksters and/or deceitful, manipulative schemers with ulterior motives, lying in wait in the shadows and use physical or metaphorical "webs" to outwit their opponents. Other times, they are portrayed as sexy seducers who attempt to lure in unsuspecting prey for the kill — for an extreme example, the term Black Widow is partially derived from a genus of spiders

whose females occasionally devour the males after mating. For extra sketchiness, these can be compounded with how some spiders secrete venom (because the usage of toxins is untrustworthy), or the weaving of spider webs can be related to illusion powers.

In many portrayals, they are more commonly evil, amoral, or morally ambiguous, and can also be cruel predators on top of being deceitful. Characters of this sort who are Guile Heroes may instead be Friendly Neighborhood Spiders.

This trope is Older Than Print. Anansi of West African myth and Iktomi of the Lakota Sioux are two examples of spider trickster figures from oral tradition.

Subtrope of The Trickster, and may also overlap with The Chessmaster or The Spymaster. Strategic web usage may also make them a Trap Master or The Strategist. Compare Spiders Are Scary, which is another reason spiders get a bad rap, and Giant Spider, which is usually more terrifying and brute-force-focused than cunning, although they can certainly overlap for pure horror. Characters sporting Arachnid Appearance and Attire or using Projectile Webbing may also be tricksters because of this trope. See also other sneaky animals: Cunning Like a Fox, Rascally Rabbit, Rascally Raccoon, Stealthy Cephalopod (another eight-legged one!) and Those Wily Coyotes.