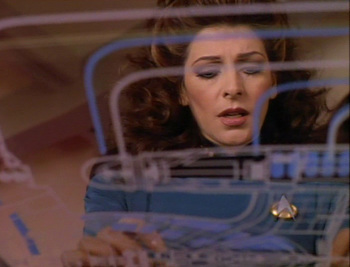 It’s the middle of the night, and Doctor Crusher has the bridge since Data is off on a mission to retrieve some radioactive material accidentally lost on a primitive planet called Barkon IV. Troi arrives and asks Crusher why she went to the trouble of earning the rank of commander when she didn’t need it to become Chief Medical Officer. Crusher explains that she did it to expand her horizons a little. The tactical officer butts in to announce that Data hasn’t replied to their messages, but Crusher isn’t concerned, attributing it to radioactive interference.

On Barkon IV, things are going worse for Data than Crusher had anticipated. Heavily damaged, he stumbles into the nearest settlement and encounters a man named Garvin. He explains to Garvin that he doesn’t remember who he is or what happened to him before he came to the village. Garvin noticed the case he's carrying, which is marked "Radioactive," but neither of them know what it is or what the label means. Oblivious to the danger, and thinking there might be clues inside, Garvin opens the case and examines the hazardous chunks of metal inside.

Back on the Enterprise, Troi confides in Riker that she's thinking of taking the bridge officer's exam. After the events of "Disaster," in which Troi found herself in command of the ship, she's been yearning to do it again. Riker warns her that he won’t go easy on her, but she’s not scared, and they agree to begin the exam the next day.

A local doctor gives Data a physical and declares him an "Ice Man" from the mountain region of the planet, and Garvin’s daughter Gia gives him the name "Jaden." Garvin has Data's metal fragments appraised by a local blacksmith, and Data decides to sell half of them. Just then, an anvil collapses on a man’s leg, and Data lifts it up, not realizing that no one else would be able to do that. The crowd is amazed, but the doctor dismisses it as an Ice Man thing. At home, Gia mentions that her mom is dead and says she was told that her mom is in "a beautiful place, where everything’s peaceful and everyone loves each other, and no one ever gets sick." Data gazes out into space and agrees that such a place exists.

We then return to Troi, who’s in the middle of failing one of her tests, letting her simulated Enterprise get blown to smithereens by an antimatter containment breach. She's aced every other aspect of the exam but can't seem to pass this last one. Riker reassures her that this is the hardest section of the exam, but he isn’t allowed to offer her any advice for her next attempt.

Garvin and Gia, along with a few others, grow ill from what the audience knows is radiation poisoning, but no one in the town can understand it. The village doctor confidently prescribes some herbal remedies, but Data has increasingly noticed that the locals don't seem to know much about science, so he decides to do his own investigations. He builds a microscope and uses it to determine that the illness isn’t an infection. He soon pieces together that the cause is the metal from the case.

While Troi is studying for yet another go-around, Riker arrives and tells her that he’s canceling the test, saying that she’s taken it three times and seems no closer to passing. Troi insists that she'll take it as many times as it takes, but Riker doesn’t think that her determination will be enough. She asks him if the test is really a Secret Test of Character or an Unwinnable Training Simulation, but Riker assures her that there is a solution. He says he he can’t allow her to serve as a bridge officer if she isn’t qualified because his first duty is to the ship. But these parting words give Troi a "Eureka!" Moment. She runs the test one last time and orders Geordi to repair the breach manually, even though doing so will expose him to fatal radiation. Riker walks in, having followed her to the holodeck, and congratulates her on passing the exam. She says that she hesitated to make the hard choice, and that maybe she really isn’t cut out for being a Commander, but Riker says that considering all the alternatives first is what any good officer would do.

Data has worked out a solution to the radiation sickness, but time is running out, with Gia now growing ill as well. He instructs the doctor to collect all of the metal fragments from the village. Angry villagers, who have blame Data for the illness, arrive and attack Data, tearing off the skin on one side of his face and revealing the circuitry underneath. Data goes into hiding while the villagers form an angry mob to go search for him. When they’re gone, Data reappears to finish his cure. He decides to secretly pour it into the town well, but he's spotted again. Data manages to pour the cure into the well just before he's Impaled with Extreme Prejudice, deactivating him.

Crusher and Riker beam down to the planet and find all the villagers healthy, but Data is apparently dead. They get the general gist of the story from Gia and then beam Data’s body and the probe fragments up to the Enterprise. Of course, Crusher gets Data fixed up in no time. His memory is restored, but he has no memory of his interlude in the village. He quickly fills in the gaps in the plot by explaining that a power surge disrupted his memory while he was downloading the probe’s logs. Troi closes out the episode by announcing that she doesn’t have time for any of this because she gets to take the bridge for a while.