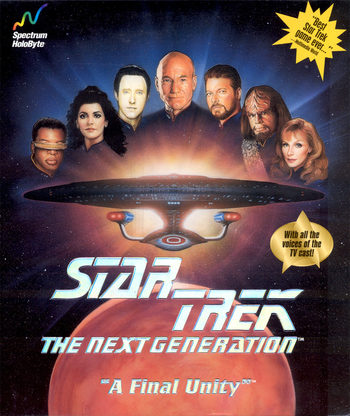 Star Trek: A Final Unity is the third in a series of Adventure Games based on the Star Trek universe, made for the PC in 1995 by MicroProse. It marked the first adventure game written specifically for the Next Generation franchise, the first Star Trek adventure to be released exclusively as a fully-voiced CD-ROM, and also the first to feature "Super-VGA" graphics.

Like its TOS predecessors (25th Anniversary and Judgment Rites), A Final Unity is a very faithful translation of the television show into the adventure game format. This means that the aesthetic style, writing style and structure of the show are all represented in the game. Unlike its predecessors, which were highly episodic in nature, A Final Unity is built entirely around a central Story Arc. It is designed to resemble a single, multi-part episode of the television series, whose story unfolds over a long sequence of away missions, space battles, conversations on the ship, and even some rudimentary management of the Enterprise itself.

The story begins with the Enterprise encountering a tiny ship fleeing Romulan space, through the Romulan Neutral Zone and into Federation space. It is pursued by a Warbird belonging to the Garidians - a race allied with the Romulans. After the Enterprise intervenes and sends the Garidians back whence they came, the rescued ship turns out to be carrying religious refugees who are fleeing from Garid. They ask Picard to assist them in rediscovering some ancient texts that might help spark a revolution back on their home planet. However, the search for these ancient texts subsequently leads to the re-discovery of an ancient civilization that once spanned a major portion of the galaxy, and disappeared overnight some 900,000 years ago.

A good portion of the game is spent on the bridge of the Enterprise, but the focus of the game is still on the away missions. There are 6 of them, played in a Point-and-Click adventure style reminiscent of the previous games in the series. This time around, the player gets to select which of the officers from the Enterprise-D they'd like to send down. In fact, the difficulty of each away-mission depends greatly on which officers are picked; If the most suitable officers are chosen for a mission, they will have interesting conversations with one another throughout and offer very helpful advice. As in the previous games, good diplomacy and defusing dangerous situations is once again critical here. Losing any crew member results in an instant Game Over.

For the first time in Star Trek videogame history, A Final Unity includes fully-3D-rendered space battles. Combat is handled through the various command posts that control the different systems on board the ship: directing weapon-fire, distributing energy, maneuvering around the battlefield, and even using tractor beams. Battles can be very difficult and very engrossing, and differ from previous games in that the arcade-like controls and flight mechanics have been replaced with a much more complex (and confusing) simulator of ship-to-ship combat, closer to the ones used in games like Star Trek: Bridge Commander. Furthermore, players have the option of relegating control to their officers during battle.

Once again, pretty much the entire regular cast from the television show gave their voices to this game, with plenty of dialogue for each of them. The game successfully manages to capture the feel of the series, right down to the Teaser at the beginning, the sounds and visuals, and of course the type of conflicts usually presented in Next Generation episodes. This should not be surprising, seeing as much of the story and direction aspects were handled by the creators and writers of The Next Generation and Deep Space Nine.

A Final Unity is also considered the last Star Trek adventure game to have No Problem with Licensed Games, and is still remembered fondly. The next attempt resulted in Star Trek: Generations, a mediocre game based on a movie of the same name. This coincided with the general decline of the adventure-game genre as a whole. At the same time, the Star Trek videogame franchise began moving into more serious ship-to-ship and fleet-to-fleet combat simulations (with the occasional lower-quality adventure being released to a less receptive crowd).