Recap / Star Trek: The Next Generation S6E13 "Face of the Enemy" 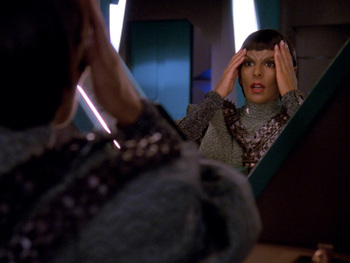 Geez, Troi, how wasted were you last night?!
Advertisement:

We open in a dark room where the only visible object is a Romulan logo. We pan down to a figure lying on a bed. The figure arches up in bed, and we hear Counselor Troi's voice, telling the computer to turn the lights on, but nothing happens. She tries again, but still no lights. She gets out of bed and walks to the nearby mirror, turning its light on, and is shocked to see herself in a Romulan uniform, made up as a Romulan!

A real Romulan officer enters the room, pleased to see Troi's awake. He identifies himself as Subcommander N'Vek, but Troi immediately demands to know where she is and why she's here. He tells her that she is aboard the Imperial Romulan Warbird Khazara. She had been abducted from a neuropsychology conference on Bokara VI. He tells her that she is supposed to be Major Rakal of the Tal Shiar, the Romulan Imperial Intelligence, and she is to order Commander Toreth, ship's CO, to alter course to the Kaleb sector. As a Tal Shiar officer, Toreth is required to follow her orders. When Troi refuses to go along, N'Vek sternly tells her that her best hope of surviving is to do what he says. Sensing no deception from him, she agrees and goes to the bridge with him.

On the bridge, while beaming aboard some cargo containers, Troi, er, Rakal, meets Toreth. When Toreth tries to ask about her mission, Troi simply orders Toreth to set course for the Kaleb sector. That doesn't satisfy Toreth, who is extremely distrustful of the Tal Shiar, and when she threatens to personally open the containers, Troi tells her she cannot touch them under any circumstance, and they set course to the Kaleb sector.

Meanwhile, the Enterprise is picking up Ensign Stefan DeSeve, a former Starfleet officer that defected to the Romulan Empire 20 years ago. Upon arriving, he is promptly arrested for treason and confined to quarters by Riker. DeSeve asks to meet with Captain Picard immediately. In his quarters, DeSeve tells Picard that he has come with an urgent message from Ambassador Spock, who is performing some more "Cowboy diplomacy". They must rendezvous with a Corvallen freighter in the Kaleb sector, and transfer its cargo to Federation space. Although he is suspicious, Picard agrees to this in light of DeSeve's reflections on his original defection.

Back on the Khazara, Troi meets N'Vek in the cargo bay. Troi is disturbed to see the guard apprehensive around her. N'Vek explains that as the Romulan Secret Police, the Tal Shiar's role is ensuring the loyalty of the Romulan people. He shows Troi the contents of the cargo containers: Vice Proconsul M'Ret of the Romulan Imperial Senate and his aides, all in stasis. He is defecting after speaking out against repressive actions of the government, so his defection would deal a major blow to the Empire. Troi realizes that N'Vek is part of the Romulan dissident movement. If they succeed, this may pave the way for other Romulan dissidents to escape. He elaborates that upon rendezvousing with the Corvallen freighter, she will go with the cargo containers to Federation space. When Troi asks why she was chosen, she is told that if something goes wrong, they'll need a Starfleet officer. Before leaving, N'Vek reminds her that the officers are due in the ward room for dinner, and as a member of the Tal Shiar, she is expected to attend.

During dinner, Toreth tries to probe "Rakal's" background in the Tal Shiar, eventually explaining why she's so distrustful of the Tal Shiar: her father had been taken away years ago for no reason. Before it gets any more awkward, an officer informs them they have reached the Kaleb sector and are being hailed by the Corvallen freighter. The freighter captain tells them they are prepared to transfer the cargo, but Troi senses deception from the captain, quietly informing N'Vek that the captain won't keep his word. N'Vek quickly shoots and destroys the freighter. Toreth immediately questions N'Vek over why he destroyed the ship, who says he'd been ordered to do so by "Rakal". Toreth attacks Troi for destroying the freight, but she reasserts authority, ordering them to cloak and hold position.

The Enterprise arrives, but finds no sign of the freighter. Picard immediately questions DeSeve over the accuracy of his message, but DeSeve assures him what he was told was indeed accurate. Noting that the freighter is an old one that could still be lightyears away, Picard warily agrees to stay.

Troi and N'Vek argue over what to do now, their mission seemingly a failure. N'Vek believes the only course of action is to travel to the Federation base at Draken IV, delivering the containers themselves. In order to do that, they will need Troi's access codes for the Federation detection grid, which is why they needed a Starfleet officer if things went awry. When they tell Toreth about this plan, she objects, believing it to be tactically unsound. Once again, Troi makes her cooperate by pulling rank. But before they go, they see the Enterprise arriving in the sector. On board, they discover the wreckage of the Corvallen freighter.

Back on the Khazara, Troi asks N'Vek if there's any way for the Enterprise to track them. N'Vek prefers to stick to their plan to travel to Draken IV, but Troi has reached her breaking point. She demands to know a way to be tracked or she will expose him as a traitor. N'Vek mentions that if the engines are put out of balance, it can create a distortion which would be picked up by the Enterprise, but only intermittently. The ship's engineer, also a sympathizer, would agree to do so.

Upon analysis, Data concludes that the freighter had recently been destroyed by Romulans. And upon picking up the distortion, they raise shields and arm weapons, following the distortion.

When Toreth realizes the Enterprise seems to be tracking them, she orders them to set a ramming course. If they are being detected, surely the Enterprise would move away. In that case, they will attack and destroy them. Before Toreth gives any order to attack, Troi orders Toreth to stand down, doing so only after N'Vek confiscates her disruptor and aims it at her. Troi hails the Enterprise, surprising Picard and everyone else to see her there. They play along with Troi's proposal, to beam her onboard to discuss terms.

As the Enterprise lowers its shields, Troi orders N'Vek to shoot a disruptor beam. The Enterprise suffers negligible damage, and the bodies of M'Ret and his aides are beamed directly to the bridge. Toreth is confused, until she finds that the containers are empty, their transporting hidden by the disruptor. She realizes that she'd been deceived. N'Vek aims his disruptor at Toreth, but he gets shot and vaporized, and Toreth takes Troi's disruptor, intending to take her back to Romulus to be executed. As the Khazara cloaks, Troi gets beamed onto the Enterprise. Back to normal, Troi is informed by Picard that M'Ret is grateful to her for her efforts, but she notes that N'Vek deserves more credit for his sacrifice.

Tropes featured in "Face of the Enemy":