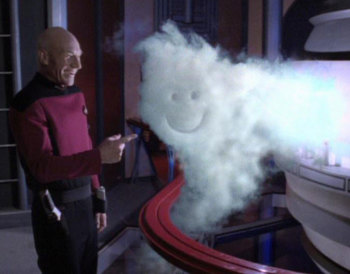 You may laugh now, but it gets dark quick.

Returning via runabout from a conference, Picard, Troi, Geordi and Data encounter strange disturbances in time. Finally locating the Enterprise, they find her in an exchange of fire with a Romulan warbird, in a zone of time that moves so slowly it appears to be still.