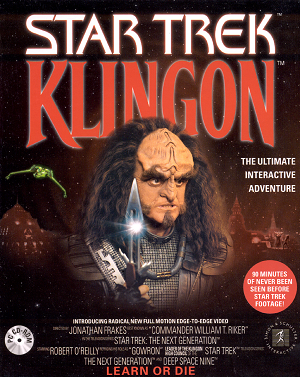 "You are frightened, young human, yes? You should be. Your strength, your skills, are no better than that of a Klingon boy, but...that will change. Once you have finished this holodeck adventure with me, this test, you will have learned more than how to live as a Klingon...you will learn how to be Klingon!" You will no longer be nov, weak as a Qa'hom; you will be a warrior! Then… it will be an honor to kill you.
— Gowron, in the beginning of the game.
Advertisement:

Star Trek: Klingon is a Full Motion Video computer game set in the Star Trek universe, made in 1996 for Windows 3.1 and Windows 95. It was created by the same crew and starred some of the same cast as its successor, Star Trek: Borg. It was also released in a novelization which features other characters from the television series.

The entire game takes place on a holodeck, as Klingon Chancellor Gowron (Robert O'Reilly, reprising his role from the series) attempts to educate you on the ways of the Klingon… the hard way. You are forced into the role of Pok, a young Klingon whose father is assassinated the day before he is to become a warrior. As a result, Pok and Gowron swear a Blood Oath to find the killers responsible. But can you even get past the Rite of Ascension?

At certain points, the action will stop and the player will need to choose what course can be taken. Since this is a simulation, wrong choices — even those ending in death — merely result in Gowron sending you back to the point you messed up… but not without adding his own two acta crystals.

The adaptation has Gowron narrating the story of Poq at a meeting with the crew of the USS Enterprise, singling out a lowly deckhand to test his own knowledge of Klingon culture.

The entire game is now playable on YouTube, thanks to the advent of linkable annotations; the first video can be found here