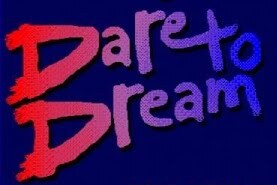 Developed for Windows 3.1 running with 16 colours, and written in Visual Basic 1.0, Dare To Dream was one of Epic Megagames' first games released for Windows, divided into three episodes. They were:

This Adventure Game takes the player inside the mind of the 10-year-old main character, Tyler Norris, whose inability to cope with the recent death of his father has brought something evil to life in the depths of his troubled psyche. Through the powers of a magic key, Tyler transports himself into the world of his dreams, to confront his dark side before it destroys him.

Of course, this results in a rather surreal style for the game as a whole (well, as surreal as you can get with a fixed 16-colour palette) and many of the puzzles are counter-intuitive. On the up side, there's no way to die or make the game Unwinnable. Forget an item? Just go back and get it.

If you're running 64-bit versions of Windows note this is most likely true if you bought your PC preinstalled with Windows 8 or later, although certain PCs from the Windows 7 era also came preinstalled with 64-bit Windows 7. 64-bit Vista and XP, however, are extremely rare and usually only appears on built-to-order systems where the owner specifically requested for said OS, you won't be able to run it due to Microsoft removing support for 16-bit software. The good news is that for those running the more recent versions of Windows (or Linux, Mac OS, etc.) is that the game works just great under Windows 3.1 running under DOSBox. Other alternatives include virtualizing a Windows 95 PC inside a compatible emulator like VirtualBox, VMWare or VirtualPC if your PC is beefy enough.