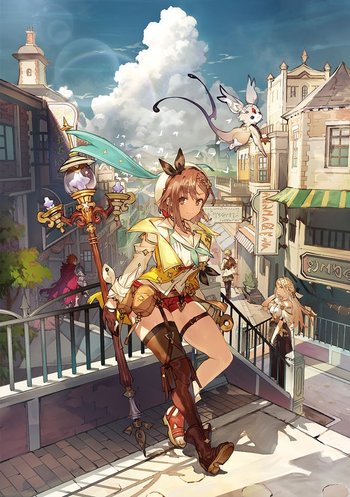 Even if my strength is lost, I will always be at your side...
Advertisement:

Atelier Ryza 2: Lost Legends and the Secret Fairy is the twenty-second game in Gust Corporation's long-running Atelier series of JRPGs, and a sequel to 2019's Atelier Ryza: Ever Darkness & the Secret Hideout. It was released on December 3, 2020 in Japan on PlayStation 4, PlayStation 5, and Nintendo Switch. It was later released on January 26, 2021 in North America and on January 29 in Europe with a Windows version also made available on Steam. Notably, it is the first installment in the entire main Atelier series where the main protagonist of one game returns as the main protagonist of another, specifically Ryza herself.

Three years after the events of the previous game, Ryza feels like her alchemy skills have plateaued. A letter from Tao takes her to the royal capital, Ashra-am Baird, where she heads for new adventures. With the help of a mysterious, fairy-like creature named Fi, she explores the area around the capital in hopes of discovering the truth behind the legends surrounding the city's ancient ruins.

The game features more dynamic exploration: Ryza can now climb, swim, dive, and swing from a rope to reach new areas. The addition of a Skill Tree lets you unlock new recipes, upgrades, and gameplay mechanics at your own pace. The battle system keeps the semi-real-time elements introduced in the previous game, while changing up the mechanics to make it more satisfying. You can now chain skills together if you have enough AP, and chaining a skill into itself can result in upgraded variations. Skills also increase your Tactics Level and grant you Core Crystal charges, which can be spent to perform an Item Rush, using multiple items in one move. Linkage Alchemy, Recipe Morph, and the Gem system also return, with new mechanics such as Evolution Link and Essence.