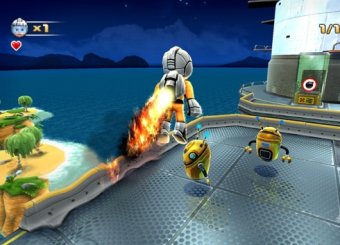 If Mario had a Jet Pack.
Advertisement:

Jett Rocket is a series of platformers made by Shin'en Multimedia, with the first released in 2010 for WiiWare and the second in 2013 for the Nintendo 3DS. They are notable for, among other things, their incredibly shiny graphics, which have a level of polish and detail some believed impossible for downloadable titles.

The game itself is named for the main character, Jett Rocket, a "Planetary Inspector." A gang of interstellar pirates known as the Power Plant Posse have descended upon the lovely planet of Yoroppa in order to steal its energy. Jett Rocket is called in to put a stop to their plans! He must dismantle their machines and return Yoroppa to its peaceful state. Like all good platformer heroes, he must do this by traveling across Yoroppa's Atoll, Northpole, and Jungle, through 12 levels, retrieving the solar cells that fell from his craft along the way. In addition to jumping, he can fly with a jetpack, as well as a variety of different moves by making use of different items—like riding a jet ski, floating on a parachute, hitching a ride on a magnetic zipline...

Technologically, the fact that the first game it looks like it does—and is in the genre it is—with just 40 megabytes of data to its name is quite the feat. Even more so considering its relatively short development period.