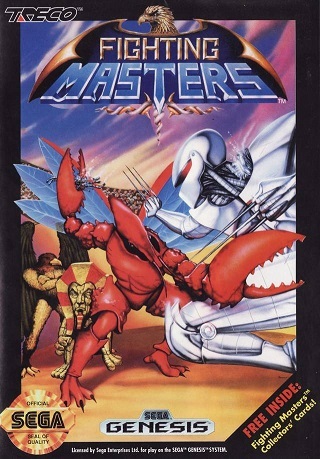 A giant red sun will go Nova within hours...
12 Star systems inhabited by sentient beings will be destroyed.
An omnipotent race, known only as the Primaries, declare their power to save one civilization from extinction.
To win the right to survive, each race must choose a champion strong enough to compete in a tournament to the death.
Only one warrior can emerge triumphant...
—Opening Narration of the US version.

Fighting Masters is an obscure Fighting Game developed for the Sega Genesis / Mega Drive by Almanic Corp, and published on August 17th 1992 by TRECO, on the wake of other more successful games such as Street Fighter II, Mortal Kombat, or Fatal Fury.

The story of the game (At least in the US version) goes something like this: In a distant galaxy, there is a red sun that will soon go Super Nova, threatening to wipe out the civilizations of twelve different star systems. An advanced race of aliens known as the Primaries, have promised to save one, and only one race from extinction, so, they decide to organize a Gladiator-esque fighting tournament, and make each race to choose the strongest of their races to compete in it, and decide which race deserves survival.

This is subverted in the Japanese version, where the story is a bit more complete: The galaxy is in danger, because a powerful warlord and resident Big Bad, named Lord Valgasu, is bent on conquering the entire galaxy, and has brainwashed the strongest champion of eleven races; your character is the last "deinwashed" warrior who fights for justice, and has to snap the other competitors out of their trance, to finally challenge Lord Valgasu in a final bout.

Gameplay-wise, of the three buttons of the controller, only two are used: there is a button for attack and a button for jump. The game has twelve selectable characters, each with their own statistics. The game has three modes: one for single player, where you pick any character and go against the other challengers, till you get to a final boss; a two player mode, which is Exactly What It Says on the Tin; and a Watch mode, to see the CPU fighting itself.

You can see reviews of the game here,

just expect a lot of yelling for the latter.