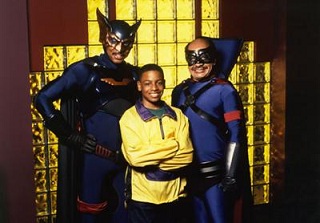 Left-to-right: Bronze Eagle, Scott, Steel Condor
Up, Up and Away is a 2000 Disney Channel Original Movie about a boy who comes from a family of superheroes but is concerned that he isn't developing his Puberty Superpower as expected.
Advertisement:

Scott Marshall is the middle child of two famous superheroes: Bronze Eagle/Jim Marshall has the standard Flying Brick powers, and Warrior Woman/Judy Marshall (has Super Strength and excellent combat skills). His older brother Adam (Silver Charge) has Super Speed and Technopathy. Even his baby sister Molly has already developed X-Ray Vision and Eye Beams. Scott himself is rapidly approaching his 14th birthday. No superhero has ever developed his powers after that age, so Scott is worried that he may turn out to be a Muggle Born of Mages. In order not to disappoint his father (who is his greatest hero), Scott pretends to have developed Super Strength (by rigging a door to fly off its hinges when he opens it) and flight (he goes outside, throws a ball at the tree, and runs away). His grandfather, a retired hero called Steel Condor (a typical Flying Brick, although his age means that taking a cab is faster than flying), isn't fooled and tells Scott to tell his parents the truth. At the same time, Scott is having typical teenage problems at school and is fighting for the spot of the soccer team captain with a potential Love Interest Amy.

Meanwhile, an Animal Wrongs Group called Earth Protectors are conducting a campaign of environmental awareness in Scott's school. They provide computers to the school and distribute CDs about the environment. However, the CDs, in fact, contain a hypnotic program that its creator Nina sees as a means to save the environment while her partner Malcolm wants to use it to become extremely rich.

Malcolm manages to capture Scott's parents and brother using their Weaksauce Weakness, aluminum foil. Using foil, he weakens them, while using the program to brainwash them into his personal super-Mooks. Scott, Randy (his best friend), and Amy arrive and manage to defeat Malcolm without any powers. Adam erases Amy's memories of the events but allows Randy to keep his memories, so that Scott has someone to talk to. Scott and Amy agree to become co-captains, while Randy suggests to Scott that he should become a Batman-like hero with Randy as his sidekick.