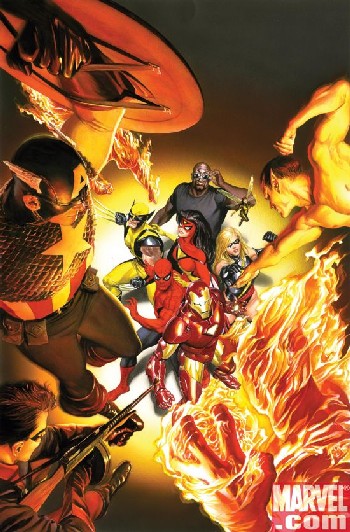 Avengers/Invaders is a 2008-2009 Bat Family Crossover between The Avengers and The Invaders. It took place in the aftermath of Civil War and the death of Captain America.

The Invaders (Captain America, Namor, the Human Torch (1939), Bucky Barnes, Toro, Union Jack and Spitfire) were in the usual chaos of World War II, and the first 5 of them passed through a strange smoke... and, all of a sudden, they are in 2007 New York City, where the Thunderbolts try to capture Spider-Man, who was unregistered. Without realizing that they had time-traveled, they thought that it had to be a Nazi trick, or worse, a Nazi invasion of the United States. Both teams of Avengers, the registered and unregistered ones, try to get the Invaders and find out how to return them to their own timeline. They were captured by S.H.I.E.L.D., liberated and (after a robot rebellion in the hellicarrier) taken to Doctor Strange. The Invaders came to 2007 because of the Cosmic Cube, reacting to the generalized sorrow over the death of Captain America and the general desire to see him return. Strange noticed as well a 6º time traveler, a regular soldier who reunited with his older self. But, before Dr. Strange could erase their memories and return them to the past, this soldier stole the Cube from Strange, to go back in time and use it to save his military unit. It did not end well: they shot him, and he lost the Cube, which was taken by the Red Skull.

In the 2007, reality collapsed, but Dr. Strange managed to send the Invaders and some of the Avengers to the past. Red Skull completely changed reality, even invaded New York. The Avengers disguised as Golden-Age super heroes, and moved to Germany, to try to get the Cube and restore reality as it was meant to be.

NOTE: At the time when this story was written, Steve Rogers was dead, and Bucky (the Winter Soldier) had became the new Captain America. Some time later, Rogers would come back to life, and retrieve his super hero identity. Still, for the sake of simplicity, when you read about "the present" here, understand it as "the 2007 present", and in the context described.

Invaders Now is a sequel of sorts, set after Steve and Toro come back to life.