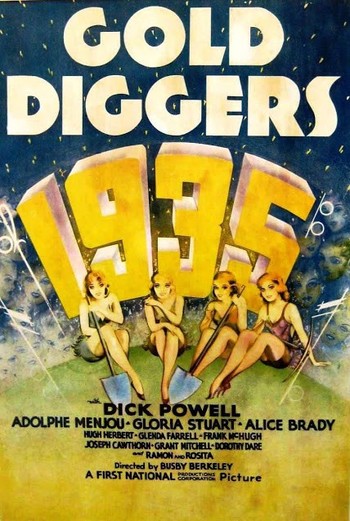 Gold Diggers of 1935 is the first Gold Digger film made after The Hays Code crackdown. Two words sum up the aftermath: neutered and sweetly innocent, for the most part. Gone are the pre-Code spiciness, making the fluff slightly more obvious.

However, it’s the first film completely directed by Busby Berkeley.

The story is as follows:

Trouble arises when Mrs. Prentiss asks Dick to escort Ann around the town before she marries insane Mr. T. Mosley Thorpe (Hugh Hubert), a snuff expert and millionaire who has no idea his secretary, Betty Hawes (Glenda Farrell) is swindling him.

Unsurprisingly, both Ann and Dick fall in love and have a hard time trying to hide it from Mrs. Prentiss.

Meanwhile, Mrs. Prentiss puts on a musical show for charity purposes and must keep it under budget while trying to fight off scheming Russian choreographer, Nicolai Nicoleff (Adolph Menjou).

Tropes associated with Gold Diggers of 1935: