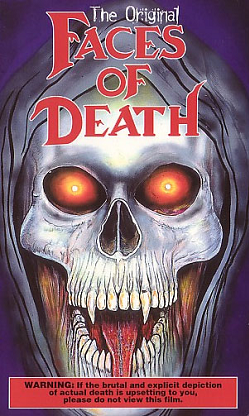 Faces of Death is a series of "shockumentaries" made by John Alan Schwartz, credited under the names "Conan le Cilaire" (for his directing credits) and "Alan Black" (for his writing credits), beginning in 1978.

The whole gimmick of the series is to showcase various ways and events involving death, with actual stock footage of real deaths and injury spliced along side staged footage. Initially hosted by Dr. Francis B. Gross (actually played by actor Michael Carr), who was later succeeded by Dr. Louis Flellis (played by Schwartz's brother James B. Schwartz), these films were ostensibly vehicles for their hosts to ponder the meaning of life and death, which were illustrated by "real life" footage, though in reality they were vehicles for all sorts of gore effects and footage of actual accidents.

See also the Traces of Death

series, which is very similar to Faces of Death except that it features less staged incidents and focuses more on actual footage of real death and injury.