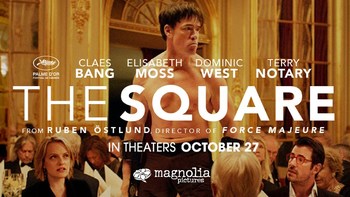 The Square is a 2017 film from Sweden by Ruben Östlund.

The film tells a story of Christian (Claes Bang), an art manager at a prestigous art museum in Stockholm, who faces several challenges in his life. His wallet and cell phone are stolen by some scam artists. Christian is able to trace his phone and demand its return, and he gets both phone and wallet, but he also gets into a messy interaction with a young boy who lives in the same apartment building as the thief. Meanwhile, at the museum he is interviewed by Anne, an American reporter (Elisabeth Moss, who delivers her dialogue in English). After the two of them meet again at a party, they have sex, but Christian hesitates when Anne says she wants something more.

Christian's aloofness and preoccupation with his personal life causes problems at the museum, including how to promote the eponymous art piece, "The Square". Busy with his issues, Christian does not check on the advertising video made to promote the piece, and this failure backfires on him badly.