Film / Anatomy of a Murder 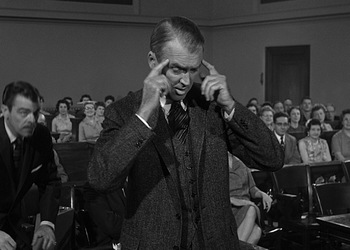 Trust a humble country lawyer to behave unprofessionally at trial... he knows what he is doing better than you do.
Advertisement:

A 1959 Courtroom Drama film directed by Otto Preminger and written by Wendell Mayes, who adapted the novel of the same name by "Robert Traver", the Pen Name of Michigan Supreme Court Justice John D. Voelker; the novel was based in turn on a 1952 murder case in which Voelker was the defense attorney.

Paul Biegler (James Stewart) is a small-town lawyer in Michigan's Upper Peninsula who can't be bothered with doing legal work, and spends most of his time fishing and playing jazz piano. That is, until he's called in to defend loutish, wife-beating U.S. Army Lieutenant Frederick "Manny" Manion (Ben Gazzara), who has been arrested for killing innkeeper Barney Quill. Manion does not deny the murder, and smugly insists he was perfectly justified because Quill raped his wife, Laura (Lee Remick). Biegler knows better, however, and the story follows his attempts to get Manion acquitted, opposed by a prosecution team headed by assistant Attorney General Claude Dancer (George C. Scott, in only his second film role). Assisting Biegler in his efforts are his alcoholic friend and colleague Parnell McCarthy (Arthur O'Connell) and sharp-tongued secretary Maida Rutledge (Eve Arden).

The soundtrack was composed and performed by Duke Ellington, who also makes a cameo appearance.

Anatomy of a Murder was one of the first mainstream Hollywood films to address sex and rape in graphic terms and use such taboo words as "sperm", "rape", "bitch", "slut", "penetration", and "panties".