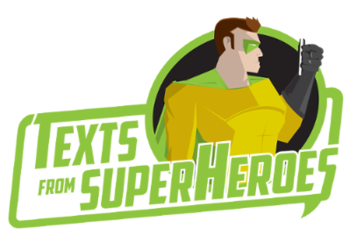 Hulk: STOP CHASING HULK!!!
Gen. Ross: How are you even texting?
Hulk: STARK MADE HULK BIG PHONE!!!
Gen. Ross: Did Stark teach you how to turn off the caps lock?
Hulk: yes.

is a comedy blog focused around images of texts between various superheroes (generally comics from Marvel and DC, though movie-verse jokes are made as well), and occasionally characters from other fiction. It's expanded into also doing sketches. The blog makes fun of characters, concepts and various other aspects of superhero comics/movies. Certainly worth a read, even if you aren't that knowledgeable about superhero comics. Find it here

. The creators also have a Youtube channel entitled Sketch From Superheroes