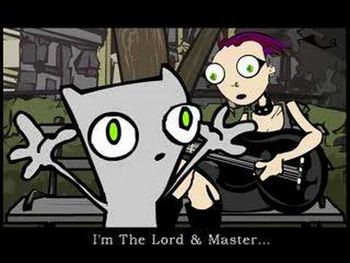 "You wanna know why everything turned out so wrong? Because you didn't take my advice and you're fucking stupid."
—Foamy, "Foamy's Rant"
Advertisement:

(the title comes from 'Writer's Block,' in which Germaine signs her poem Neurotically Yours after going insane) is an online cartoon series created, animated, starring, voiced by, and generally fueled by Jonanthan Ian Mathers (also known as J.I.M). Episodes are one to three minutes long and feature an ongoing storyline with some Character Development for the lead characters (generally Germaine and sometimes Foamy, since the other characters tend not to learn anything from their mistakes - ever), while the rest feature hyper-aggressive, comically exaggerated rants by Foamy about various annoyances and what he considers to be the stupidity of humans.

The show is notable for:

There are a few recurring elements to the series:

The show rebooted as of September of 2011 with updated character designs and plans to incorporate aspects of something like six other projects Mathers has sporadically worked on since NY's inception (so that he's only got the one show to worry about).

2020 saw the debut of a podcast sub-series, Squirrels & Robots, featuring the four squirrels as well a robot named J.O.S.I.

This show shows examples of: