Useful Notes / The Moons of Uranus 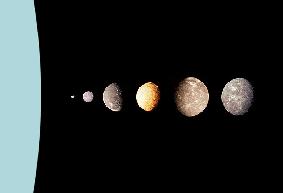 Or perhaps we should say, The Moons of Uranus; Or, The Bard in the Heavens.

Uranus is a small gas giant, and its moons are small, too. It can boast none so big as Jupiter's Ganymede or Saturn's Titan; its largest moons are medium-sized. There are twenty-seven of them known, with only the five biggest being spherical. Very little is generally known about them, since Uranus hasn't received many probes.

Uranus's lack of any moons that rival or surpass Earth's Moon in size has long confounded astronomers, as that makes it a distinct oddity among the four giant planets. At the same time, it has been pointed out that Neptune's largest moon started out as a dwarf planet, and its capture likely wreaked havoc on the original system, so there is currently no way to tell which of the ice giants has a moon system more typical for their type.

One thing that is known about the moons of Uranus is that they tend to have dark surfaces due to a process called radiation darkening. Uranus is distant enough that radiation and charged particles from beyond the Solar System impacts its moons, breaking up molecules on the surface. This is followed by chemical reactions that slowly build up a layer of organic materials. This is NOT an indicator of life.

Unlike the moons of the other planets, whose names are drawn from Classical Mythology (except for, you know, the obvious, who inspired

a Goddess rather than be named after one), the names of the moons of Uranus are drawn from the classics of English Literature, specifically Alexander Pope's The Rape of the Lock and the plays of William Shakespeare. Uranus was discovered by an Englishman (well, a naturalized German... but so was the King!), Sir William Herschel; his son John (who was thoroughly English by upbringing) ended up naming the moons when they were discovered a while later. The younger Herschel reasoned that the sky god Uranus would be accompanied by spirits of the air, and took the names of these spirits from the aforementioned works. Later astronomers ignored the "spirit of the air" bit and just gave names from Shakespeare and Pope.

Thirteen moonlets orbit close in; two (Cordelianote Named for the tragic heroine of King Lear and Ophelianote Named for Hamlet's love interest in, well, Hamlet) serve as shepherds for the rings of Uranus. These are very small and of irregular shape, made of ice, tholin and some silicate dirt. They are very dark; the entire system is a chaotic jumble prone to changes.

Scientists predict that sometime between 1000 years and 1,000,000 years from now, the inner moons Cupidnote The only actual ancient deity of the lot, named for his appearance in Timon of Athens and Belindanote Named for the heroine of The Rape of the Lock will collide. It's unknown what the result will be. They predict either 1), they'll "bounce" off each other, 2) merge, or 3) make Uranus' whisper-thin ring system a whole lot thicker.

The largest of the inner moons, named for the mischievous sprite and servant of Oberon in A Midsummer Night's Dream. It was the first moon of Uranus to be discovered by Voyager 2 and the only inner moon to be imaged by the probe in any detail. Its surface is heavily cratered and its features are named after mischievous European spirits, just like the moon itself. 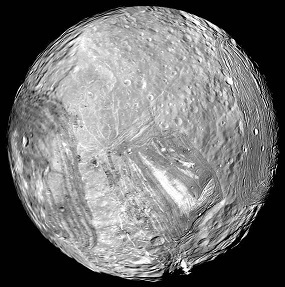 This moon, barely large enough to be a ball, is unusual in the high variability of its terrain. It is named for Prospero's daughter in The Tempest. Miranda's surface has patchwork regions of broken terrain indicating intense geological activity in the moon's past, and is criss-crossed by huge canyons. A discredited theory claims that Miranda was shattered and then re-coalesced into its current clumsy shape; scientists then thought it was a tidally-heated ocean moon, like Europa and Enceladus, in the past, then froze over, causing its ice crust to crack and break. The current theory is that Miranda is actually still in the middle of formation, with lighter substances rising to the surface, while the heavier elements are sinking towards the core, providing a snapshot of world formation. Nowadays it is, in all aspects, a boring iceball in the middle of blackness, dead as a doornail.

Miranda is home to the tallest cliff in the Solar System, Verona Rupes. Craters are named after other individuals featured in The Tempest, and other geological features are named after locations featured throughout Shakesheare's plays.

White and Black: Ariel and Umbriel

These medium-sized moons (1100-1200 km in diameter) are very similar in all except color. They are named for two characters from The Rape of the Lock. Ariel is a very shiny object, Umbriel is dark, albeit with a bright, shiny crater called Wunda on its equator. It's likely that they have silicate cores, but subsurface oceans are unlikely. In all other aspects, they are boring iceballs in the middle of blackness, dead as a doornail.

The Little Fairies: Titania and Oberon 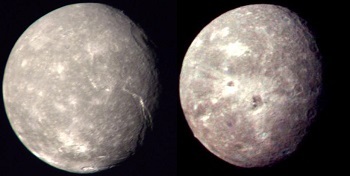 These two are the largest moons of Uranus, with diameters of almost 1500 km, rivaling Saturn's Rhea. The are named for the Queen and King of the Fairies in A Midsummer Night's Dream. They are large enough to have tiny traces of atmosphere and be suspected of hiding subsurface oceans deep on the border between ice and rock. That makes these iceballs in the middle of blackness possibly not boring and possibly not dead.

Geological features on Titania and Oberon share the same naming conventions as Miranda, though names of individuals for craters can be drawn from any Shakespearian play.