Film / The Luckiest Guy in the World 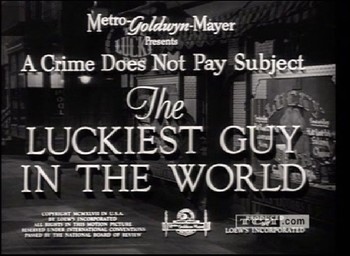 The Luckiest Guy in the World is a 1947 short film (20 minutes) directed by Joseph M. Newman.

It is the 50th and last short in the MGM Crime Does Not Pay short film series that dated back to 1935. The film follows Charles Vurn (Barry Nelson), who has a serious gambling problem. Charles has been losing a lot of money betting on the horses, which is bad. He's been stealing the money from his job as an insurance salesman to gamble with, which is way worse.

Events come to a head when his boss, unimpressed at Charles's excuses for not getting the regular payments from policy holders, suggests that he may soon go to collect the money himself. Charles thus needs to come up with the money immediately. He goes home and asks for his wife Martha's savings, left from her mother. Martha refuses, and events take a tragic turn, and then take some more odd twists.