Film / Crime of the Age 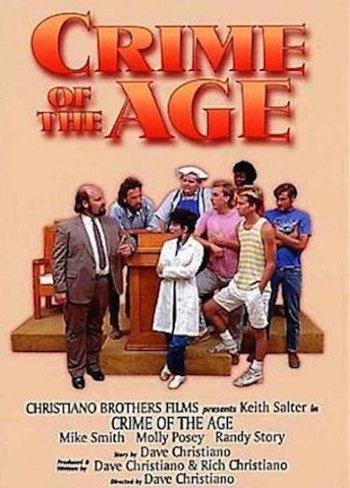 Crime of the Age is a 32-minute-long Christian mystery drama from 1988 by Dave and Rich Christiano, and one of their earliest attempts at filmmaking.

In the dark of night, an office at a Christian childrens' camp is broken into and a crime is committed. A police detective is called to the scene to find the culprit. The suspects: the camp director's six employees. The only clue: a carrot left on the floor. And the crime?

Someone stole a book.

No, seriously. That's it.

The stolen book was about being a Christian (not an actual Bible, mind you) and this leads the detective to suspect that the thief may not be one. What follows is six copy-pasted conversations where the detective questions each of the suspects:

The detective then joins the camp employees for a dinner where carrots are served. The six people he questioned all take a carrot, but put it back to avoid incriminating themselves. However, the camp director takes one. Later, the director gets the detective another copy of the stolen book. When he reads it, he figures out who the book thief is.