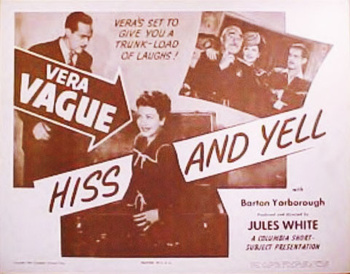 Hiss and Yell is a 1946 comedic short film (18 minutes) directed by Jules White.

Vera Vague (credited as "Vera Vague", although the actress's name was Barbara Jo Allen) is a ditzy dame who's taking a train ride back home to see family. As she's walking down the street she sees what appears to be a man chopping off a woman's head. In fact, it's a fellow named Barton O'Hara who happens to be a Stage Magician named "Bluebeard the Great", and he was practicing a decapitation trick for his act, but Vera never finds that out.

Vera gets on the train. Sitting on the seat across from her is none other than Barton. When Vera reads a newspaper article about a real "Bluebeard" who's chopping off women's heads, she becomes convinced that her traveling companion is the killer.

Director Jules White is best remembered for being the regular director for The Three Stooges. Emil Sitka, who made his film debut in this short, went in to star in a lot of Three Stooges shorts.