Film / Tell It to the Marines 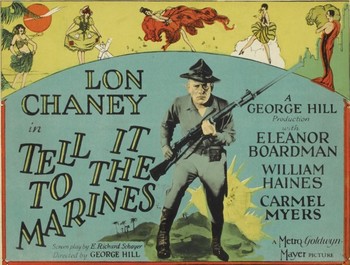 Tell It to the Marines is a 1926 silent film directed by George W. Hill, starring Lon Chaney, William Haines, and Eleanor Boardman.

Skeet Burns (Haines) is a young rapscallion who signs up with the U.S. Marine Corps solely for the free train ticket to San Diego; he's planning to go from there to Tijuana to play the horses. Lacking anything better to do, however, he eventually does report to boot camp. There he comes under the hard hand of Sergeant O'Hara (Chaney). O'Hara, a grizzled veteran drill instructor, is determined to whip the callow, lazy Burns into shape and make him a real Marine.

Further complicating the interaction between O'Hara and Burns is the presence of Norma Dale (Boardman), a beautiful Navy nurse. O'Hara is in love with Norma but she is either unaware of or uninterested in his attentions. The brash, overconfident Burns comes on way too strong and ruins a date with Norma, but she falls for him anyway.

One of the very few films of Lon Chaney's career in which he wasn't wearing makeup and didn't play a monster, lunatic, or criminal. Made with the full cooperation of the Marine Corps and shot on location at the real San Diego Marine base as well as at sea during a real naval exercise.