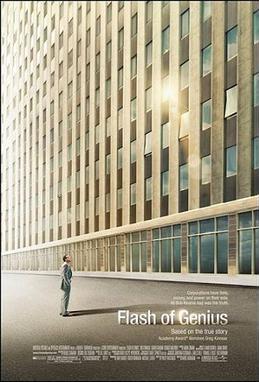 Flash of Genius (2008) is the story of Robert Kearns (Greg Kinnear), who develops and patents the intermittent windshield wiper. When he displays it to Ford Motor Company executives, he makes a deal to manufacture it himself and sell it to them.
Advertisement:

Eventually, while attending a Ford dealers convention displaying the Mustang, he discovers Ford used his design without his consent, credit or payment, and decides to sue Ford.