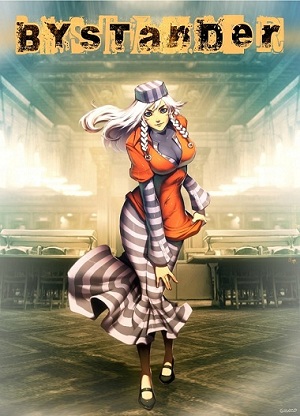 Lucretia wearing the outfit she picked for her first meeting with her parole officer.
"I'm just a bystander."
— Lucretia
Advertisement:

There is a word for people like that. A pre-packed fluffy-feeling word the government’s spin doctors had come up with.

Lucretia had her own words for her peer group: freaks of nature, science projects, and fanatics. They were all the people that had been born, transformed or self-willed into something that should have been bizarre, but was becoming less so.

All she wanted to do was live an unnoticed life in her brownstone, working at the library and chasing down idiot cops who took her books on stakeouts.

Of course, there are problems with that, such as the fact that she's considered an interesting research specimen by some of the more amoral companies. Her tendency to stick her nose in where it probably shouldn't be. A love-hate relationship with various alcoholic beverages.

Oh yes, and the fact that she's still on parole.

Bystander is a self-published novel

written by Luke "Thrythlind" Green and set in 2035 Seattle detailing the plight of superpowered parolee Lucretia, starting with her interfering with a bank robbery and blowing outward from there.