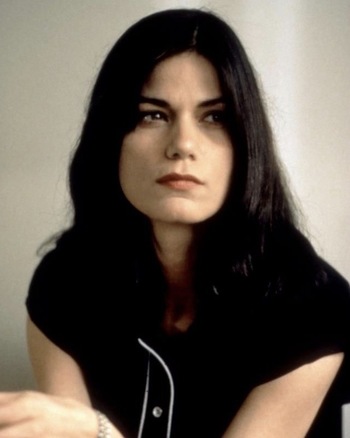 "They're my two favorite words these days: Oscar reject."
Advertisement:

Clorinda "Linda" Fiorentino (born March 9, 1960† 1958 according to some sources in Philadelphia) is an Italian-American actress. She began performing in stage plays at Rosemont College before graduating in 1980, and making big-screen debut in the 1985 drama Vision Quest and receiving further recognition for Gotcha!, After Hours, The Moderns, Queens Logic and Jade.

During a good part of The '90s, Fiorentino's career was at its peak thanks to her appeareances in The Last Seduction, Men in Black and Dogma, with the latter two being among her most recognizable roles. For her performance in The Last Seduction, she won the New York Film Critics Circle Award for Best Actress, the London Film Critics' Circle Award for Actress of the Year, and was nominated for the BAFTA for Best Actress in a Leading Role.

Once considered a very noteworthy actress, Fiorentino's career began to falter at the beginning of the 2000s. The films on which she starred at that year, What Planet Are You From? and Where The Money Is, were critically and financially panned, and her next movie, Liberty Stands Still even went straight to video as a result. This, coupled with the fact that Dogma director Kevin Smith revealed the actress was quite The Prima Donna on set, caused Fiorentino to largely vanish from the film industry, and she made one last appearance in the 2009 movie Once More With Feeling before disappearing from the big screen altogether.

After having a heart attack in 2018, Kevin Smith said that Fiorentino was one of the people that reached out to him after to see how he was doing, and he admitted that it was wrong to call her out as he did in the commentary, and that he was happy with her performance in Dogma. He said he was happy she reached out to him, as it gave him the chance to apologize to her for saying what he did, and make amends.

"You know what was really nice? I hadn’t spoken to Linda Fiorentino, who was in Dogma, for years. Not because we had some sort of nasty falling out, we just hadn’t spoken. I remember on a commentary track on the DVD—Janeane Garofalo was in the movie and at one point I said it would have better if she played the lead, which was a really shitty and stupid thing to say. Thoughtless, considering that Linda was the lead and Linda did a great job. So it had been years since I had spoken with Linda and I got an email from her. And of course I was thankful to hear from her and it also gave me a chance to say I’m so sorry that I ever said that thing years ago. It gives you a chance to make amends. So that was my favorite one. I heard from so many people, but that one really stood out for me because, if somebody had said, “Oh, the movie would have been better if Ben Affleck directed it,” that would have hurt my feelings. I know it hurt her feelings and really unnecessarily because I always loved her performance in the movie."

Television shows on this wiki: