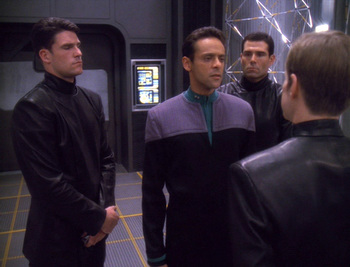 Dr. Bashir, Trek audience, meet Section 31.
Dr. Bashir's plans to attend a cushy medical conference are cut short when Director Sloan, an operative supposedly from Starfleet Internal Affairs, interrogates the senior staff on suspicion of treason. The investigation eventually focuses on Bashir, who is forced to defend himself against accusations that he is a deep-cover Dominion spy. Bashir's search for the truth leads to him uncovering the existence of a clandestine organization that has operated in the shadows of the Federation from its very inception.