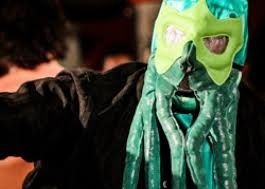 Lloyd Cthulowitz is (was?) a Professional Wrestler who competed for Inter Species Wrestling and other independents in Pennsylvania. His gimmick is of a monster designed by the Mad Scientist Dr. Gene Spleissing based on Cthulhu, the most famous of the Great Old Ones created by the early 20th Century Cosmic Horror writer H. P. Lovecraft. Oh, and he's a lawyer. He debuted in 2011 and has yet to win a title.

"You need justice, you need compensation and you need Lloyd Cthulowitz's Tropes":