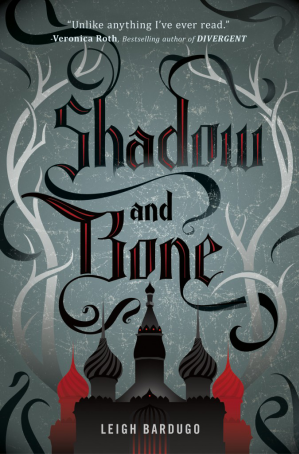 "What is infinite? The universe and the greed of men."
Advertisement:

The Grisha Trilogy is a set of adventure-fantasy Young Adult novels written by American author Leigh Bardugo. It is also the series that spawned The Grishaverse.

Additionally, Bardugo wrote the spin-off series Six of Crows, set in Kerch two years after the events of Ruin and Rising. She also wrote The Nikolai Duology which serves as a sequel to both this series and Six of Crows.

Set primarily in the fictional country of Ravka, there is a form of magic that exists known as "The Small Science." Those who can wield it are called Grisha, powerful practitioners considered to be a part of an exclusive class. Those who do not possess this power are called Otkazat'sya, and function normally as shopkeepers, laborers and soldiers.

In the first book, Alina Starkov is a young woman who lives the simple life of a mapmaker, travelling with the First Ravkan Army and charting The Shadow Fold, a mysterious dark region that splits Ravka into two and is considered to be uncrossable because of the monstrous Volcra that lurk within. Raised in an orphanage with no discernible magical abilities, Alina accepts this as her lot in life and the only way she can be useful to her country. Her only family is her best friend and fellow soldier Mal, with whom she has been secretly in love for years. Of course, Mal doesn't realize any of this and treats her like a sister.

When their regiment is sent into the Shadow Fold, it is almost immediately met with disaster. The company is powerless to stop the slaughter as the Volcra attack and feed on the soldiers. Mal is nearly killed, and when Alina tries to help she suddenly unleashes a blinding light that destroys the Volcra. Alina is immediately brought before The Darkling, the enigmatic leader of the Grisha and second in power only to the King. It is discovered that not only is Alina a Grisha, but that she possesses the rarest and most powerful ability of them all: That of a Sun Summoner, and the only one who can destroy the Shadow Fold.

In January 2019 it was announced that Netflix would be adapting the trilogy into a series (Shadow and Bone) overlapping with a prequel story for Six of Crows. Staring Jessie Mei as Alina Starkov, Archei Renaux as Mal Oretsev, Freddy Carter as Kaz Bekker, and Ben Barnes as the Darkling. The series was scheduled for a late 2020 release, but the COVID-19 pandemic slowed the work on post-production. It was released in April 2021.

Has a character sheet that needs some sweet lovin'.