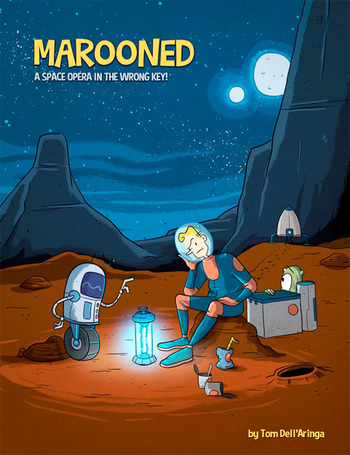 A not-chosen-for-his-smarts astronaut, John Floyd, upon landing on Mars discovers he hasn't taken enough fuel to come back. Whoops. Fortunately, when he and his robot companion decide to explore, they find a very nice bunch of natives who readily take them in.

Thus begins the funny, cute and touching story of attempting to come back home, of why is Mars a desert and how the Earth space program is not really what it seems, of friendship, responsibility and crazy stunts.

is drawn by Tom Dell'Aringa

. It was pulled offline for a while in an attempt to turn it into a print comic, but was restored to webcomic format in 2016, with a whole new storyline involving the mindstones and where they came from.

Tropes found on the surface of Mars: