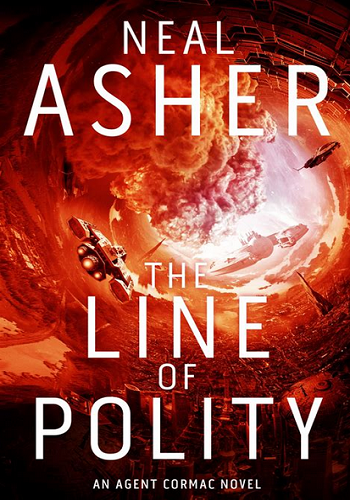 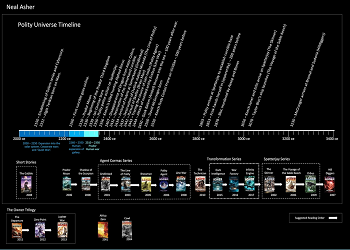 .
The Polity is the name for the science fiction universe created by British author Neal Asher, and the Earth-based United Nations in space, The Polity.
Advertisement:

The stories follow three plotlines. The first, occurring in the 2400s is centered around the Earth Central Security Agent Ian Cormac, and later his allies that have managed to survive at least 2 books. The second, set in the 31st Century, is centered around three travelers to the primitive world of Spatterjay and its notoriously deadly seas. The third takes place sometime between the two, following around the rogue AI war drone Penny Royal.

The stories of Cormac are Post-Cyberpunk and give the reader an excellent view of the military and political conditions of the Polity. Anything related to the other storyline covers life inside Polity borders from a civilians view.

The Cormac or Polity novels which form the core are:

Other novels within this setting include: