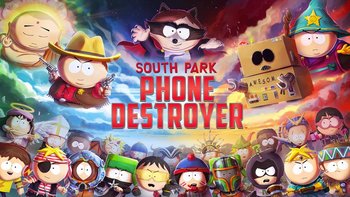 As if it were made by the Canadian Devil himself!
"This game contains both in-app purchases and the option to watch ads for rewards. To disable the ability to make in-app purchases adjust your device settings. In-app purchases cost real money and are charged to your account and for those reasons this game should not be played by anyone."
— Disclaimer
Advertisement:

South Park: Phone Destroyer is a 2017 mobile phone game based on the South Park series, published by Ubisoft and co-developed by RedLynx and South Park Digital Studios. Once again, you enter the world of South Park (or more accurately, the eponymous mountain town) as an avatar called the "New Kid". This time, your New Kid is a prodigy at the phone, and is guided by Cartman to fight with and for him by doing battle with various opponents. To accomplish this, your New Kid summons various characters from their phone. These characters are collected as cards, and can be one of fivenote originally four; the Superheroes theme was added in summer 2019 types, along with two types of non-character cards:

Players have more to do than just following the story, however. Cartman also runs a shop for the player to purchase various cards, which can be guaranteed characters, guaranteed attacks, guaranteed items, or freemium content in card packs, which contain a set number of cards that get more and more guaranteed for containing rarer stuff. They can also take a visit to "Don King" Butters and do battle against other players, for various rewards such as in game currency and more cards. There, they can join a team of other players to give each other cards and gain other exclusive bonuses.

The game was formally released on November 9th, 2017, but soft-launched sooner in select countries a week after its reveal at E3 2017.

To get past the Great Trope Wall of China, you must list these tropes