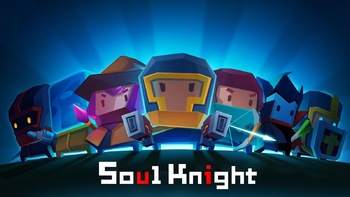 Soul Knight is a Run-and-Gun shooter that's also a Roguelike. It was developed by ChillyRoom for the Android and iOS platforms, and released on February 17th, 2017.

In the world this story inhabits, there are magic stones that maintain the balance of the world. One day, however, a bunch of bad guys steal these stones and the world consequently starts to fall into chaos. You goal is to get these stones back and save the world. In order to get each magic stone, you will need to reach the bottom of the dungeon.

The journey begins through a randomly generated dungeon, and you start out with a starter weapon that barely deals any damage. As you progress in the game, you will find various types of weapons, from generic firearms to over-the-top weapons. Being a Roguelike shooter, whenever you end the game and start over, you lose all your dungeon progress and weapons. Thankfully, though, you do keep the character upgrades and furniture boosts that are from the lobby.

The goal is to reach the bottom of the dungeon and recover the magic stone.