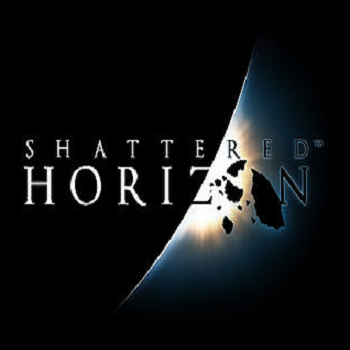 Shattered Horizon is a multiplayer First-Person Shooter, created by FutureMark and published on PC through Steam in 2009. It is about a war between Earth and the Moon, with space infantry engaging each other in zero G environments. It is notably hard sci-fi for an FPS, and could very well be compared to Planetes but with guns — or Moonlight Mile.
Advertisement:

40 years into the future, a mining accident on the moon has caused a substantially huge chunk of it to dislocate, with the debris settling into various orbits around the Moon and Earth - the ring around Earth being referred to as the "arc". This has made supply lines into and out of space difficult, and the scant few survivors who remain hail from one of two factions; the International Space Agency (ISA) and the Moon Mining Cooperative (MMC). The ISA believes the MMC to be responsible for the catastrophe, and with the last large shipment to space being essentially a big stockpile of weaponry the two sides begin war against one another, fighting for their very survival over the last available resources.

The game launched with 8 maps that could be played in either team deathmatch or objective-based. In 2011, a "Last Stand" update had also added a single player, and a co-op mode. Unfortunately, the game was pulled from Steam in 2014, as the developer, which was bought by Rovio two years earlier, had to refocus on other projects.