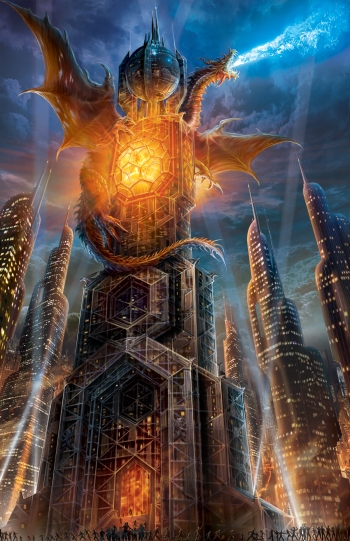 SolForge is a digital Trading Card Game created by Stone Blade Entertainment (formerly known as Gary Games, creators of Ascension) with an assist from Richard Garfield, the creator of Magic: The Gathering and thus the TCG genre. It's currently available on iOS, Windows via Steam, and Android. The main gimmick of the game is that cards "level up" over the course of a game, so that when you draw them again they'll become more powerful.
Advertisement:

The general rules of the game go like this: At the beginning of your turn, you draw five cards. You get to play two of them (except on the first turn of the game, where you can only play one). Each card has three levels. When you play a card, its leveled-up version is placed in your discard pile. There are five lanes into which creature cards can be played, and on each turn creatures will fight with either the opposing creature in the same lane, or attack the opponent directly if there isn't one. At the end of the turn, you discard the cards you haven't played, but those ones don't level up. Every four turns your discard pile is reshuffled into your deck, giving the possibility to draw some of those leveled-up cards. The first player to reduce their opponent from 120 to 0 Hit Points wins.

The game is set in a world where there's no sun, the only source of light and heat being the titular SolForge, a giant Magitek tower. The Forgeborn, those with the power to harness the SolForge's magic, fight for domination of the area surrounding the Forge. There are four factions of Forgeborn: the Alloyin, Nekrium, Tempys, and Uterra.

The game is currently at Post-Beta stage for PC, iPad, iPhone and Android, and is free-to-play. The PC version is available through Steam, while the iOS versions are available at the Mac App store and the Android version from Google Store. Players start with some starter decks, and can play daily for silvers (the in-game currency), cards, booster packs and also tournament tickets. Players can also spend real money for Gold (the other in-game currency), which will let players buy alternate art cards, as well as allow anything purchased with said Gold to be shared with other players.

The game's expansion sets are released every few months or so, and each set is often accompanied by additional mini-releases. The chronological list of expansions the game has after its Open Beta, launched in August 2013, is currently as follows: