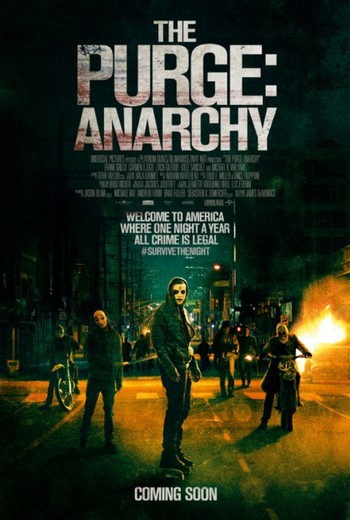 "Get ready to bleed, rich bitches! This is our time now!"
"We found your car, Sergeant. Your plates told us who you were. It was easy to see where you were headed tonight. Hell, I would've done the same thing. The unwritten Purge rule: don't save lives. Tonight we take lives. We make things manageable. Unfortunately the citizens aren't killing enough. So we supplement it all to keep things balanced. It's important work the NFFA does, and we can't have any interference. We can't have heroes... oh, no sir... no heroes. I hope you feel cleansed. Blessed be America, a nation reborn."
— Big Daddy
Advertisement:

The Purge: Anarchy is a 2014 American social science fiction action horror film directed and written by James DeMonaco. It is the sequel to the 2013 film The Purge, and the second entry in the The Purge (Franchise). The film stars Frank Grillo, Carmen Ejogo, Zach Gilford, Kiele Sanchez, Zoë Soul, and Michael K. Williams, while Edwin Hodge reprises his role of "The Stranger" from the first movie. It was released worldwide on July 18, 2014.

Set on the night of March 21, 2023. Remember how while watching The Purge, you asked things like "Are there really that many monsters around to make it so successful? If everybody's preparing for Purge Night, how come so many people die? Why would your average monster wait a whole year to satisfy sadistic urges to murder and kill? How does it even work?" Well, this movie answers a few of those questions - the Purge doesn't work - at least not the way people think it does...

Followed by The Purge: Election Year.

The Purge: Anarchy contains examples of: