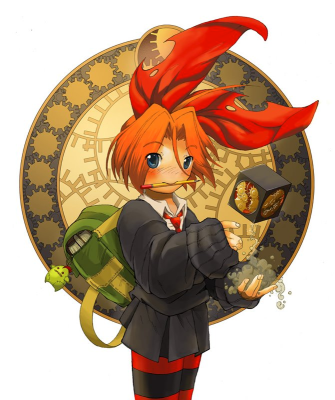 Step one: put his soul in a box.
Advertisement:

Hollow Fields is an OEL Manga series written and illustrated by Australian artist Madeleine Rosca and published by Seven Seas Entertainment. Spanning three volumes, the first was released in June of 2007, with the final volume out on January 6th, 2009. Hollow Fields placed Rosca among four winners of the first ever International Manga Award

It follows the adventures of a girl named Lucy Snow as she attends Miss Eleanor Weaver's Academy for the Scientifically Gifted and Ethically Unfettered (also known as Hollow Fields); where steam-powered teachers, called Engineers, teach students various aspects of mad science. Each week, the student with the lowest grades gets sent to the windmill, whence no one has ever returned. She barely manages to avoid detention with the tutelage of the mechanical box Dr. Bleak and soon decides to investigate the mysteries of the windmill with her new friend, Claude McGinty. All the while, Lucy must try to make nice with the other students, some of whom are out for blood.

A prequel, titled The Clockwork Sky, tells the story of Mr. Croach's niece, Sally Peppers, and his most recent creation, a robotic police boy named Sky, who has the mysterious ability to dream.