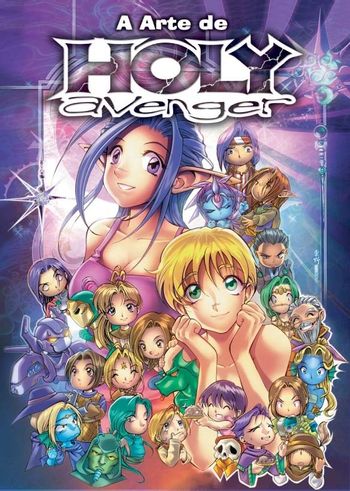 Even some Gods and other cosmic powers in the mess.
Advertisement:

A 42-issue animesque Brazilian comic written by Marcelo Cassaro with art by Erica Awano, set in a medieval fantasy world called Arton, based on the TabletopRPG Tormenta (meaning both "Storm" and "Torment" in Portuguese and named after an interdimensional storm that corrupts and destroys whatever it appears on and stays there), originally published in the RPG magazine Dragão Brasil. The series also spawned various spinoffs and drama cds.

Arguably the most successful non child-oriented Brazilian comic book, the series is infamous for its outrageous anime references and a combination of fantasy and horror elements with screwball action-comedy.

After losing his place in the pantheon of Arton due to a conspiracy that could exterminate all gods, Sszzass the God of Betrayal and serpents was presumably killed and forever forgotten. In reality he was exiled and extremely weakened. To recover his divine status, he plots a very intricate plan during decades involving various heroes and events.

Taking central part in this plan there are innocent Raised by Wolves druid Lisandra, redheaded idiot hero Sandro Galtran, stripperiffic cloudcuckoolander elven mage Niele, insanely grumpy dwarf-troglodyte Tork, The Paladin, a legendary fallen hero and his twenty Rubies of Virtue, indestructible magical gems forged by each one of the twenty most powerful gods of Arton and currently scattered all over the world.