Film / The Curse of Frankenstein 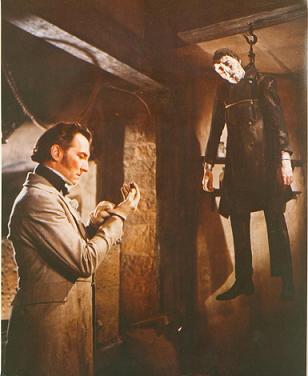 The film that single-handedly launched the Hammer Horror brand, The Curse of Frankenstein was released in 1957. Directed by Terence Fisher, the film stars Peter Cushing as Baron Frankenstein and Christopher Lee as The Creature. Besides being Hammer's first horror outing, it is also notable as the studio's first colour release.

Owing more to the Universal Horror films than the original novel, this film once again tells a story of a scientist who creates life with terrible consequences.

Fascinated with Creating Life, Baron Victor von Frankenstein starts conducting experiments of such with the help of his tutor Dr. Paul Krempe (Robert Urquhart). Unlike the well-meaning scientist from the Universal films, Frankenstein is depicted as an unfaithful womanizer who has no qualms against killing people for body-parts and having those who obstruct his work murdered.

It was during this film when Peter Cushing and Christopher Lee met in person and struck a lifelong friendship.

This film is cursed with: