Film / The Revenge of Frankenstein 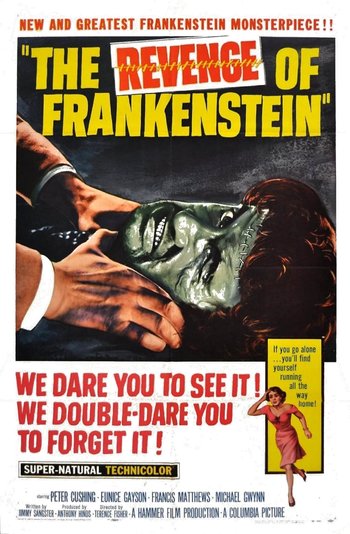 The Revenge of Frankenstein is a 1958 British horror film made by Hammer Horror Productions. Directed by Terence Fisher, the film stars Peter Cushing, Michael Gwynn and Eunice Gayson. It is a sequel to Hammer's The Curse of Frankenstein.

Baron Victor Frankenstein (Cushing), sentenced to death, escapes execution with the aid of one of his followers. Three years later, Frankenstein, now going by the alias of Doctor Victor Stein, has become a successful physician in Carlsbruck. Together with Karl, the hunchback who facilitated his escape, Frankenstein continues with his experiment of transplanting a living brain into a new body, but this time one that is not a crude, cobbled-together monster. And the deformed Karl is more than willing to volunteer...

Followed by The Evil of Frankenstein in 1964.