Film / The Man Who Could Cheat Death 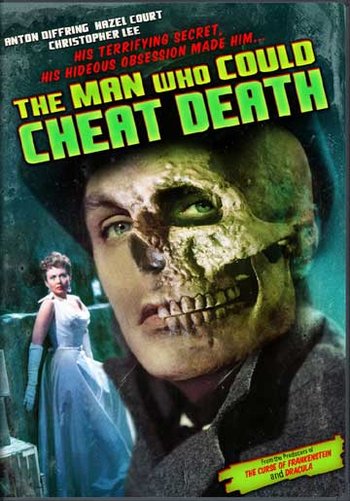 The Man Who Could Cheat Death is a 1959 Hammer Horror film, directed by Terence Fisher and starring Anton Diffring and Christopher Lee. Jimmy Sangster adapted the screenplay from the play The Man in Half Moon Street by Barré Lyndon, which had been previously filmed in 1945.

In Paris during 1890, 104-year-old Georges Bonnet (Diffring) is a sculptor who maintains a youthful appearance by regularly committing murder and using his victims’ parathyroid glands as an elixir to ward off the signs of age. When Bonnet requires a vital surgery to be undertaken he asks his old colleague Prof. Ludwig Weiss (Arnold Marlé) to perform it. He declines and Bonnet then blackmails Pierre Gerard (Lee) into performing the operation by endangering the life of Janine Dubois (Hazel Court), a young lady in whom both Bonnet and Gerard are romantically interested.

Tropes in The Man Who Could Cheat Death include: