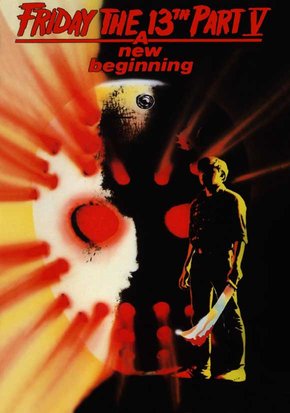 There was a man so cold, no life was in his eyes...
"If Jason still haunts you, you're not alone!"
— Tagline
Advertisement:

A New Beginning is the fifth film in the Friday the 13th series.

Several years have passed after Tommy Jarvis's traumatic encounter with Jason in The Final Chapter, and he has been spending that time by going through many mental institutes, with no sign of getting better. Now he has been moved to Pinehurst Cottage, a halfway house near Crystal Lake for troubled teenagers. Things don't start well when one of the residents is murdered by another, and soon afterwards a killer starts offing people in the surrounding area. Has Jason Voorhees returned once again?

The now laughable subtitle of the previous film was still somewhat true at the time, as this film was meant to move the series in a new direction beyond Jason Voorhees, but after its poor reception, the producers changed course and brought Jason back in the next installment.