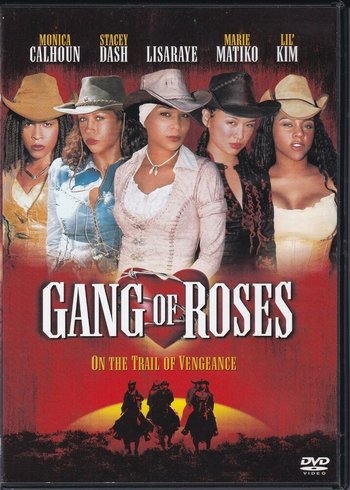 Gang of Roses is a 2003 Western action drama film written and directed by Jean-Claude La Marre. The movie took just 18 days to film.

The film starts off with Left Eye Watkins and his gang attempting to bully Sheriff Shoeshine Michel into giving them gold and women. A female member of the gang is extremely enthusiastic about the women and sets out to rape a can-can girl in the middle of town. While resisting, the can-can girl cuts the female gang member who in turns shoots her in the middle of the road.

The can-can girl happens to be the sister of Rachel, the protagonist. Rachel, a religious, reformed bad girl, rounds up her former gang members to seek revenge. They are followed by a blacked haired lady who is also seeking revenge upon them.

Tropes used in Gang of Roses include: