Literature / The House With a Clock in Its Walls 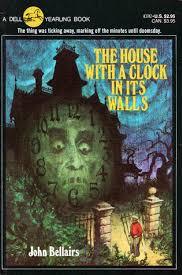 The House With a Clock in Its Walls is a Gothic horror novel for younger readers by John Bellairs, with illustrations by Edward Gorey. Published in 1973, the work introduced the character of Lewis Barnevelt, his magician uncle Jonathan, and their friends Florence Zimmermann and (mentioned only) Rose Rita Pottinger, who live in the town of New Zebedee, Michigan; Jonathan owns the eponymous House, which was previously the property of a married couple of evil magicians with some very nasty secrets. It proved a large success, and Bellairs published two sequels in 1975 (The Figure in the Shadows) and 1976 (The Letter, the Witch and the Ring).

After taking nearly fifteen years off to work on two other series, Bellairs had begun work on at least three additional sequels at the time of his death. Brad Strickland was hired by Bellairs' son to complete the unfinished manuscripts, with the results published from 1993 as The Ghost in the Mirror, The Vengeance of the Witchfinder, and The Doom of the Haunted Opera. After this, Strickland began writing additional novels based on the characters.

The first book in the series was adapted as one of the stories in the 1979 Vincent Price television anthology Once Upon a Midnight Scary. A feature film adaptation was released in 2018, directed by Eli Roth and starring Jack Black, Cate Blanchett and Kyle Maclachlan.

open/close all folders
General or recurring tropes
The House With a Clock in Its Walls
The Figure in the Shadows
The Letter, the Witch, and the Ring
The Ghost in the Mirror
The Vengeance of the Witch-Finder
The Doom of the Haunted Opera
The Beast Under the Wizard's Bridge
The Tower at the End of the World
The Whistle, the Grave, and the Ghost
The House Where Nobody Lived
The Sign of the Sinister Sorcerer

Alternative Title(s): The Figure In The Shadows, The Letter The Witch And The Ring, The Beast Under The Wizards Bridge