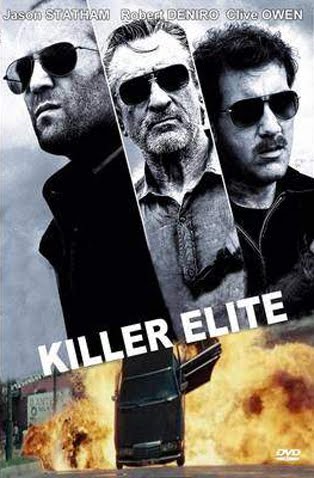 Killer Elite is an action-thriller film released in 2011 starring Jason Statham and Clive Owen, and follows a professional hitman as he attempts to undertake a highly sensitive assassination mission to save his partner and mentor.

Set in 1980, the film follows Danny Bryce (Statham), a hitman who left the profession after having a crisis of conscience during a mission. A year later, Danny is approached by a mysterious contact named The Agent and is told that his mentor and former associate, Hunter (Robert De Niro), has been captured for failing to complete an assassination mission. Hunter will be executed if Danny doesn't complete the job. Danny meets with an Arabian sheikh who forces him to assassinate three former British SAS agents that killed his three eldest sons during an operation in Oman, and enlists the help of fellow assassins Davies (Dominic Purcell) and Meier (Aden Young). The three men work together to complete the assassinations, although several problems arise along the way. At the same time, The Feathermen, a secret group of former Special Air Service (SAS) operatives, assigns their head enforcer Spike Logan (Owen) to investigate the assassinations.

Logan attempts to stop Danny and his crew by any means necessary, while both of them find out they're both being played by several other people at the highest levels of power.

The film was adapted from a best-selling book, The Feather Men, which was released in 1991 and was supposedly based on real-life events concerning a secret society of retired SAS members whose job it was to protect other SAS members and avenge them if necessary.

Not to be confused with the 1975 Sam Peckinpah spy thriller The Killer Elite.